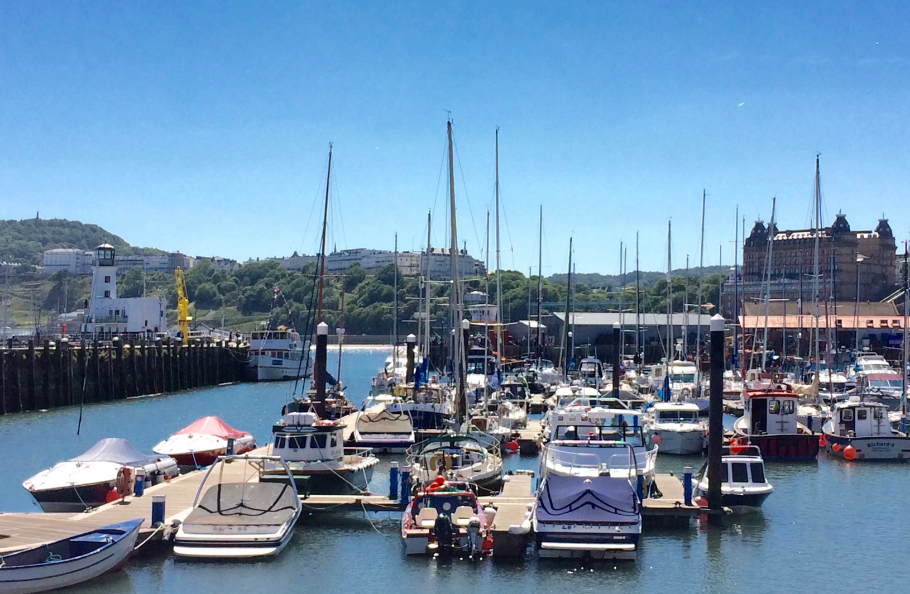 14. The Harbour, Pier and Lighthouse.

Since earliest recorded time, Scarborough’s livelihood depended on the safe haven provided by the curve of sandy beach protected by the vast bulk of the Castle headland. Successive English Kings made grants for harbour works from 1225 onwards, recognising the strategic importance of a strong maritime base. King Richard III, a frequent visitor to Scarborough both before and during his short reign (see page 19) stationed warships in the port. These were the forerunners of the modern fishery protection service, and they took part in the first ‘cod war’ with Iceland as long ago as 1484. During the 15th and 16th centuries, the port went into a decline. Only the fishing fleet and the transport of sea-coal kept it alive. Queen Elizabeth I granted £500, one hundred tons of timber and six tons of iron for the strengthening of the outer pier. It was severely damaged in the great storm of 1613 and subsequently repaired and maintained out of sea-coal money granted in 1614. William Vincent was responsible for an extension to the old pier and this was completed in 1752. From this date work began on the 1380 foot long East Pier which cost £12,000 and was not completed until 1826. The massive stones used in its construction, weighing up to 30 tons apiece, were quarried locally and positioned manually. Convicts were among those employed on this massive project. Smeaton’s design has withstood North Sea gales since the early 19th century. The West Pier was begun shortly afterwards, using stone from the then redundant inner island pier. The inner pier was finally demolished in 1880. All the fishing activity of the modern port, including a daily fish market is now concentrated on the West Pier. Here you will see the local cobles and larger keel-boats off-loading their catches and taking on fresh supplies. The North Wharf, adjoining Sandside, was built in 1926, when the herring trade was approaching its  zenith. In those colourful days, Scottish fisher lasses came South in their hundreds to gut, fillet and pack in tubs the rich herring harvest of the North Sea. It is said that you could walk across the inner harbour from end to end across the decks of the tightly packed fishing trawlers. In 1804, the first recorded lighthouse on Vincent’s Pier consisted of a flat roofed building with a brazier on top as the only warning signal. The purpose of the lighthouse at this time was to warn ships of the available depth of water in the harbour. Tallow candles, oil lamps and gas were used successively to provide a better light. The engineer Robert Nixon built a brick lighthouse at the harbour in 1806. By 1850, the lighthouse had acquired a second storey and its familiar domed top. Modern electric lighting gives a visibility of nine miles for the powerful beam. During the 1914 German Bombardment, a shell sliced through the lighthouse tower. It had to be dismantled to first floor level, and was rebuilt by public subscription in 1931. As ships increased in both size and numbers built during the late 18th century, there were far more shipwrecks around our coasts during stormy weather, many of them happening in sight of a safe harbour. These tragedies led to the development of a lifeboat service. Scarborough’s first lifeboat station was on the foreshore, near the present underground car park at the approach road to the Spa. Thomas Hinderwell, Scarborough’s first serious historian, helped to secure the town’s first lifeboat. Scarborough was the second place in England to have a lifeboat. The station was moved to the harbour area in 1821, firstly on the landward side of the present Foreshore Road, and latterly on the seaward side. From 1801 to 2012, there have been 1458 launches of the Scarborough Lifeboat and 577 lives saved. A total of 16 lifeboatmen were lost during this period. The worst loss of life to the lifeboat crew since the last war was when the lifeboat overturned approaching the harbour on 8th December 1954, and three crewmen were swept overboard and drowned.
Strolling along Sandside in the direction of the Castle and Marine Drive, you will come across an old stone building, known as King Richard III’s house, now used as a restaurant.