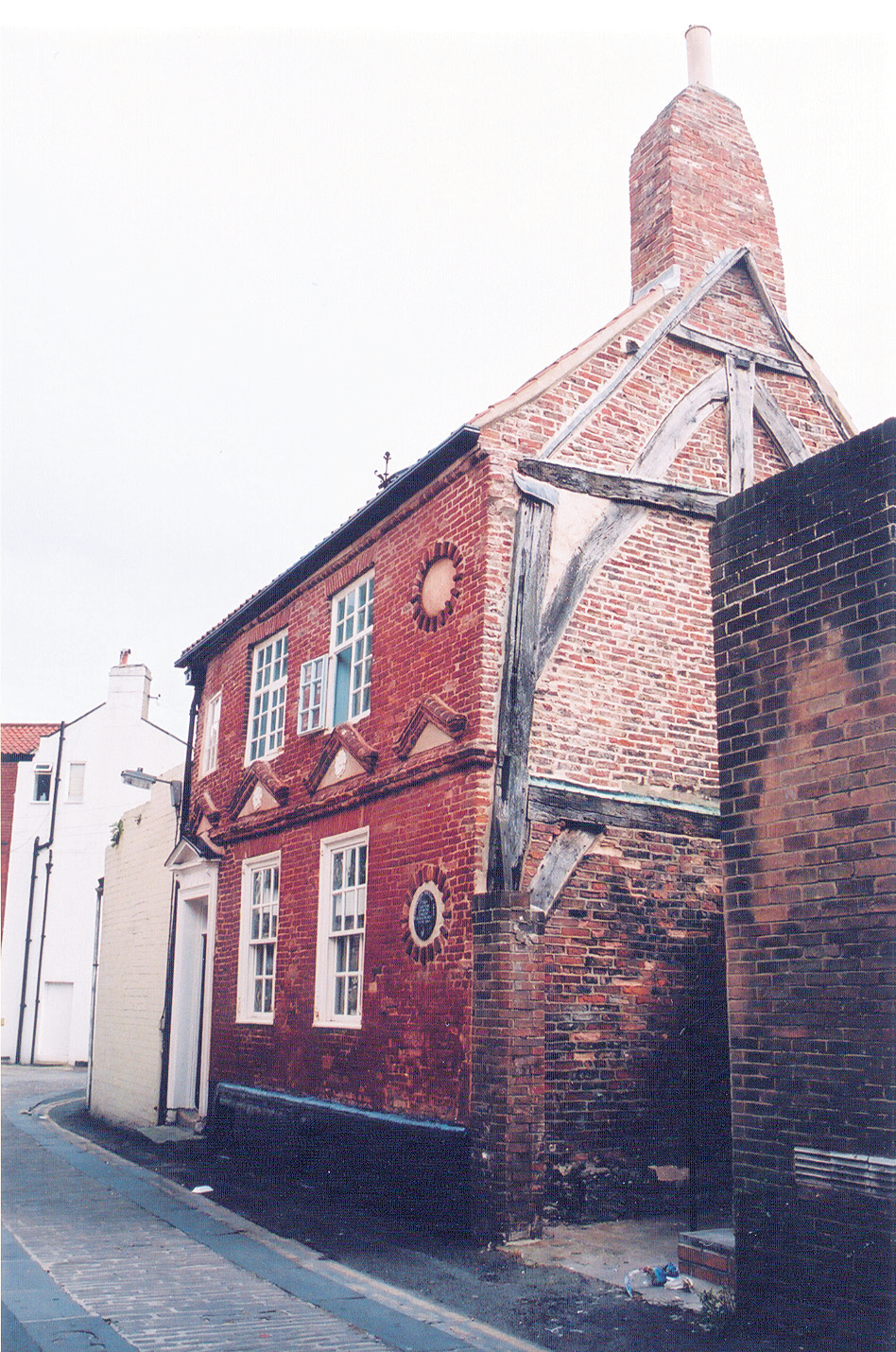 The Three Mariners Inn is probably the earliest licensed house in town. Note the 15th century timber framework in the end wall and try to spot the roman numeral V

Arguably the earliest licensed premises in Scarborough (though the Newcastle Packet on nearby Sandside is a rival claimant) the Three Mariners is certainly one of the oldest buildings in town. In the west gable end you can see an A shaped frame in massive timbers with a central post known as a crown post. This timber frame dates from the 15th century. If you look carefully you can see that many of the timbers have the roman numeral V carved into them; this is the frame number. Frames numbered VI and VII were found within the building when it was being restored a few years ago. The Quay Street façade was re-fronted in brick in the 17th century in a style known as Artisan Mannerism. Note the external decoration: four pediments (chevrons in moulded brick) above the windows and doors, a moulded string course and the two elliptical blind windows at the end. The building was altered again in the 18th century when the ground floor windows were replaced by vertical sliding sashes and the nice doorcase and door were installed. Because of the frame numbering, we now know that The Three Mariners is part of a much larger building. The former Dog & Duck, another 15th century timber framed building just along the street, is thought to be part of the same building but the section between the two was removed many years ago. The Old Dog and Duck has  some carving known as ‘brattishing’ similar to 15th century buildings in York – it may have been done by the same carpenter. The Three Mariners was once known as ‘The Blockmaker’s Arms’, a name which suggests an association with the great shipbuilding era of later years. During Victorian times, it was a favoured haunt for the many artists who found the nearby harbour area an endless source of inspiration. For many years in the 20th century it was a museum during which time the figurehead above the side entrance was installed. After extensive restoration the building is now a private house. Be prepared next for a fairly stiff climb up the slopes of Castle Hill. Continue along Quay Street until a flight of steps can be seen on open space to the right. Ascend Long Greece Steps and carry on up Castlegate until the road turns to the left. Paradise House is the large grey painted building on your left.

Click here to continue your walk to 18. Paradise House